Mystery of the Toilet 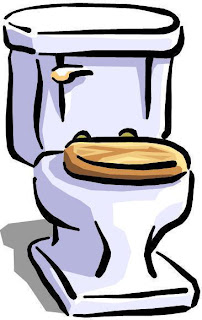 Our daughter, Melissa and Son-in-law, Kevin recently moved into their new home near Orlando. The house is about 3 years old and was a short sale. The previous owners moved out about a month before Melissa and Kevin closed and moved in. It is a larger home since they have 4 children and need some space of everyone.
Lynn and I are in Florida for the fall months. Since we could not move into the home we are staying in for several days, we bunked in with Melissa and Kevin and the 4 grandchildren. I noticed that the toilet in the main bath did not flush properly. Of course being a plumber that was not something that could go unfixed! And as a guy who likes tools and working with my hands, I brought my trusty tool bag properly outfitted with us to Florida. I was fairly certain that one of the grandkids or a child of the previous owner had dropped something into the toilet that should not have been deposited there.
It was Monday morning and the two grandsons left for school thus removing some of the chaos of four kids wanting to know what Grandpa is doing. The toilet was a builder’s model but the other similar toilets in the house flushed well so I was sure I would find a comb, a toy, a jar lid, or some other item in the trap-way of the toilet. I did not have a toilet auger with me (they don’t fit well in a tool bag), so I removed the tank from the toilet and pulled the bowl.
This is where it gets interesting and my point of the story. I gently place the bowl into the bathtub on a rubber mat so I can check the closet bend for the “object”. There is no “object” but there is standing water at the bottom of the closet bend. I immediately thought that the “object” has gotten lodged in the lateral piping from the closet bend to the stack. I stopped and unfroze my brain and evaluated the issue. The trap-way is the smallest diameter of the water and waste pathway so an “object” logically would not make it into the lateral without continuing on its path through the system. My next thought was some sort of construction debris, a rag, a chunk of a 2x4 or something similar was the culprit. But then my brain got into gear and said to me that it would not just be a slow partial flush as the toilet was operating, but a total blockage and a potential overflow of the toilet, which did not occur. Also the water remained in the lateral at the bottom of the closet bend even after several minutes. Being a well-trained Master Plumber for over 35 years, I remembered the basics of plumbing. Hot is on the left, “stuff” flows downhill and payday is Friday. The lateral must be going uphill!
I removed the screws holding the closet flange to the floor and tried to pry up the piping. If it didn’t work, I would need to open the living room ceiling to make a repair and that was not my first choice of solutions. Slowly the PVC closet riser came up but the water was not leaving. I decided that I would continue to pry it up since there was not much to lose. If the line broke or a joint broke that wouldn’t be an issue since I would need to open the ceiling for a repair anyway. The pipe kept coming up. The water began to drain. I continued to pry it up. At four and ½ inches, the water finally drained out completely. Having cleared hundreds of plugged or partially plugged toilets over the years, I had never seen this problem before.
What do I do now? Thinking about the alternatives of opening the ceiling to provide support for the lateral or just cut the riser down and glue a new flange on to the riser to support the lateral, I decided to just depend on the closet flange to hold up the piping. Not the way I would do it if I have access to the lateral piping, but with a substantial gluing surface on the flange I used, I was counting on the flange glue joint to support the piping. With everything put back together, the toilet now flushes perfectly for a builder’s model.
But how did this happen? The installing plumber didn’t support the lateral properly and the finish plumber didn’t test flush the toilet to assure that it was working properly. Perhaps a carpenter or the tile man pushed down the riser and broke the hangers. In any event, the details of a job are as important as the core task of the job. Be sure to remind your technicians of the importance of details especially testing of the finished job whether plumbing, HVAC, or electrical. They too may find a unique problem!
Posted by Dan@SayYesToSuccess at 1:24 PM